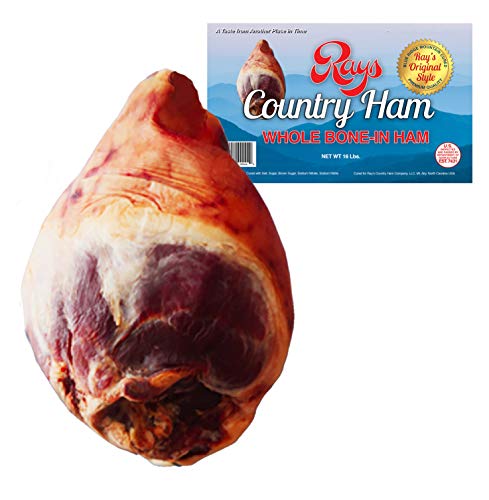 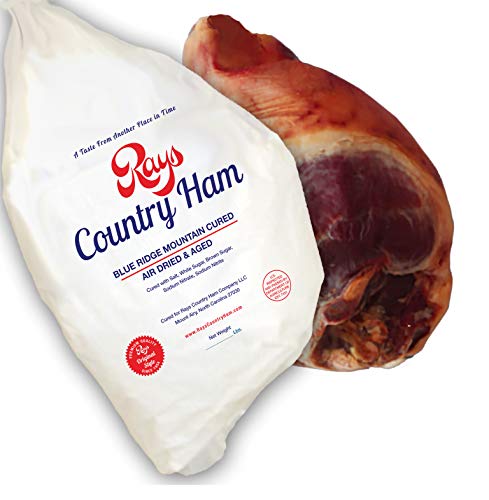 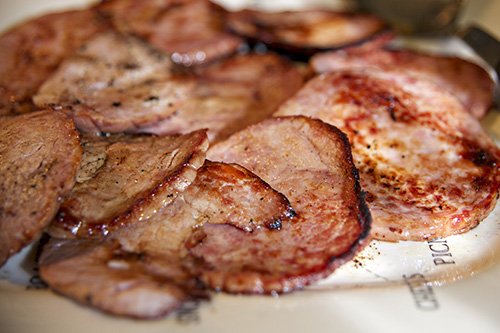 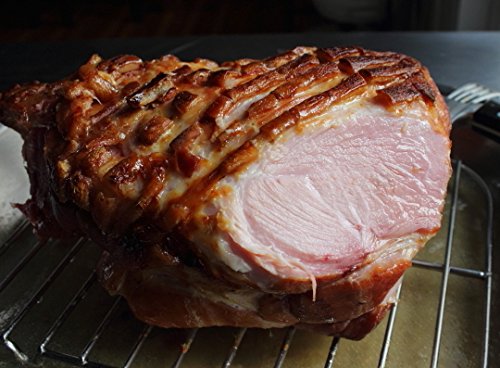 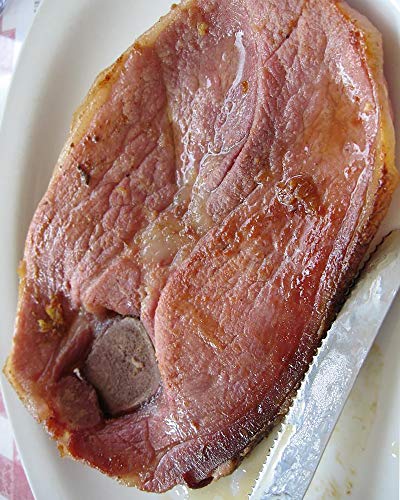 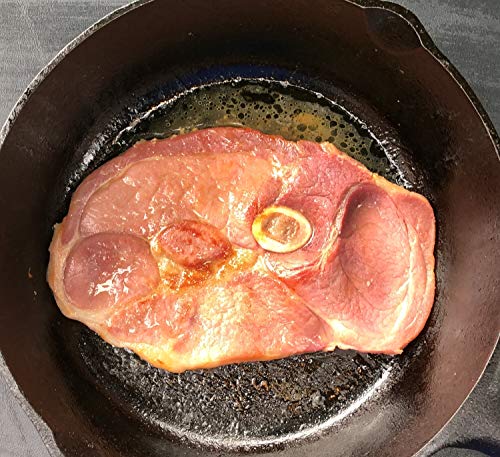 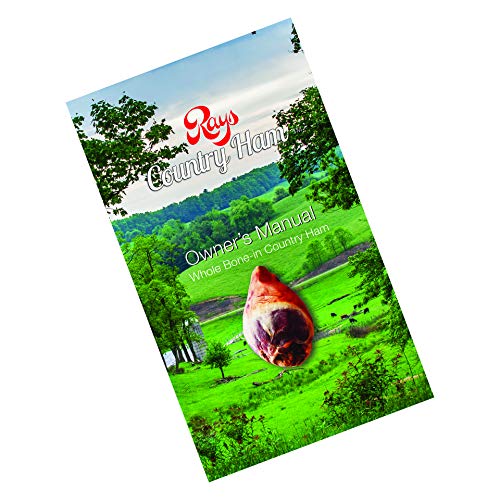 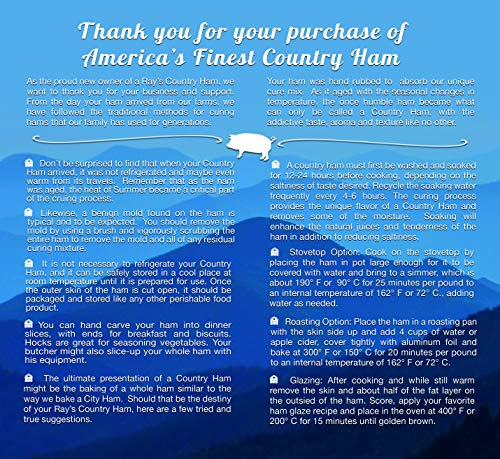 Ray Goad ~ A Fast Food Pioneer: Ray and Geneva Goad opened their first restaurant, about ten years after Ray was discharged from the Navy at the end of WWII. Home cured Country Ham and Granny Goad’s Biscuits were featured on the menu. Ray became the innovator of the fast food breakfast, and the very first to serve Ham and Sausage Biscuits in a fast food restaurant.

Country Ham Traditions: Country Ham harks back to the way food was preserved on the family farms of Appalachia before there were electricity and refrigeration. The family tradition of butchering hogs in the late fall allowed for them to be preserved during the cold winter months with a natural curing process. Our Country Hams are drastically different from their more common cousin, the wet-cured ham, also known as city ham. The flavor of a Country Ham is more complex, with an almost addictive taste, aroma, and texture unlike any other.

Blue Ridge Mountain Cured: Today those Country Ham traditions are being kept alive in the Blue Ridge Mountains of North Carolina. Where once moonshiners and revenuers raced hot cars along Thunder Road, a few facilities owned and operated by the descendants of those early American pioneers are still making Country Hams. You can’t eat at a Ray’s Restaurant today, but you can enjoy Ray’s Country Ham in your own kitchen knowing that in every slice you will find that Taste from Another Place in Time.

Four Generations: Ray Jr. and Susan, the children of Geneva and Ray Goad, are perpetuating the legacy of Ray’s and the rich traditions of Country Ham for Ray Goad’s Grandchildren, which are now also active in the Family business. They assure that Ray’s Country Ham is cured in the same style featured for almost 50 years at the Ray’s Starlight Restaurant in Mount Airy, NC and, at dozens of Ray’s Kingburgers and Sweet Sue’s Restaurants across five of the Mid-Atlantic States.

If you know and love the beautiful shadows of the Blue Ridge Mountains, that’s where you will still find us. They called it Mount Airy long before our native son Andy Griffith started calling it Mayberry. We just call it home, and that’s a place on this map where you will find A Taste from Another Place in Time.

Vacuum-Packed for Shipment with “Owner’s Manual”

Don’t be surprised to find that when your Country Ham arrives, it will not be refrigerated. It is not necessary to refrigerate it because the USDA approves vacuum packed dry-cured artisanal meats to be safely stored at room temperature. Once the outer skin of the ham is cut open, it should be packaged and stored like any other perishable food product. You can hand carve your ham into dinner slices, with ends for breakfast and biscuits. Hocks are great for seasoning vegetables. Your butcher might also slice-up your whole ham with his equipment. The ultimate presentation of a Country Ham might be the baking of a whole ham similar to the way we bake a City Ham. Should that be the destiny of your Ray’s Country Ham, you will find a few tried and true suggestions in the Owner’s Manual included with your Country Ham when it arrives at your shipping address.

A country ham must first be washed and soaked for 24-48 hours before cooking, depending on the saltiness of taste desired. Recycle the soaking water frequently every 4-6 hours. The curing process provides the unique flavor of a Country Ham and removes some of the moisture. Soaking will enhance the natural juices and tenderness of the ham in addition to reducing saltiness. There is a Stove-Top option which we describe in the Owner’s Manual, but we prefer the Roasting Option: Place the ham in a roasting pan with the skin side up and add 4 cups of water or apple cider, cover tightly with lid or aluminum foil and bake at 300° F or 150° C for 20 minutes per pound to an internal temperature of 162° F or 72° C. Glazing: After cooking and while still warm remove the skin and about half of the fat layer on the outsied of the ham. Score, apply your favorite ham glaze recipe and place in the oven at 400° F or200° C for 15 minutes until golden brown.

Favorite Side Dishes to go with County Ham

Our Mother, Geneva Goad, never cooked Country Ham without a big pan of Fried Apples. Her secret was to use tart apples, medium heat cooking the apples in butter to soften, and then adding sugar to lightly brown until easily pierced by a fork and before becoming soggy.

Southern Buttermilk Biscuits are a must, but not to worry. Granny Goad’s famous recipe, that made Ray’s Restaurants famous since 1952 can be found on our Web site. However, her Grandchildren admit that the frozen ones at your Grocery Store are also now mighty good.

With a twist on seasoning Collards with ham, let the greens season your ham dinner. Finishing these collard greens with a little vinegar to taste balances the ham salt and essential sweetness of other sides. Be sure to cook plenty for leftovers.

Folks in Mt. Airy thinks they created this North Carolina dessert/side with both a bottom crust and lattice top. After baking for a time a sweet milk dip is brushed on and forms a rich glaze. You can find a recipe on the Epicurious web site.

A Taste from Another Place in Time

The kitchen is often the warmest place in the home, the gathering spot, the center of family life. When families gather, the heat in the kitchen is not always from the oven. Often it is also from the warmth of our being together again at the heart of most families’ earliest memories.

☆ AGED SALT & DRY CURED HAM.☆ – Country Ham harks back to how food was preserved for generations on the family farms of the Blue Ridge Mountains before electricity. In the aging process, a benign mold on the ham is typical and expected. Mold is removed by scrubbing the ham with water and a brush. If you love Country Ham, you will find the saltiness is intense and just right. If you are new to Country Ham and don’t like strong salty tastes, this Ham might not be for you.
☆ A TASTE FROM ANOTHER PLACE IN TIME☆ – Folks who grew up eating Country Ham give us five-star reviews and tell us that they have “finally found it.” But our story also attracts those who are expecting their Mother’s City Ham, and we are just as disappointed as they are when they don’t like it. Bon Appétit Magazine says it best: “To Southerners and pork devotees, Country Ham is legendary: an exquisite dry-cured artisanal meat rivaling prosciutto in its rosy-hued perfection.”
☆ SURPRISE YOUR FRIENDS & FAMILY WITH A GIFT OF COUNTRY HAM☆ – Sharing of good food is our way of showing we care. When families relocate, often they can’t find the foods and tastes they remember and long for. A Whole Bone-in Ray’s aged dry-cured Country Ham will bring back that familiar aroma and taste of home we never forget.
☆ COMPLETE WITH AN “OWNER’S MANUAL.”☆ – From the day your ham arrived from our farms, we have followed the traditional artisanal methods for curing hams that our family has for used for nearly 75 years! We care so much about our hams we include with each Whole Country Ham complete instructions for how to care for your ham and the options for preparing it to be enjoyed.

Eventide: Recipes for Clambakes, Oysters, Lobster Rolls, and More from a...